You should eat warm tortillas

When we made these in the test kitchen a few weeks ago, I ate about 5 warm tortillas with cinnamon on them. I let the kids each have one, which I felt was very generous. When my sister-in-law was driving away I realized she had put ALL the leftovers in her car. I literally ran after her and made her pop her trunk so I could steal some. They were all eaten later that day. It was the longest I could wait.

It had been AGES since I’d had a real, homemade, fresh, warm tortilla. Then we melted butter on top. Then we sprinkled a little cinnamon and sugar. It was the best day… I may have been inspired to hit the gym early the next morning, but it was totally worth it.

If you want an easy taco filling idea, try our Blackened Chicken with Avocado Crema. YUM!

Orrrr, take your taquitos to the next level with this super easy make ahead meal.

These reminded me of the one time in high school when I went to Mexico to build … something … totally blanking on what the trip was for. But you know what I remember like it was yesterday? The food. We had a homemade Mexican meal (there, they just call it a meal, heehee) made by the sweetest old woman ever. And she made fresh tortillas and then topped it with simple, fresh ingredients. I remember the flavor and the warm tortilla in my hand like it was yesterday.

So be sweet and make your family some fresh tortillas. I bet they’ll remember them.

Also, do yourself a favor and double the recipe. 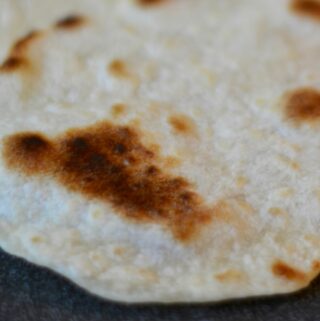 Eat a few while they’re warm, seriously. These homemade tortillas will bring so much flavor and love to your next meal.
Tried this recipe?Let us know how it was!

This site uses Akismet to reduce spam. Learn how your comment data is processed.